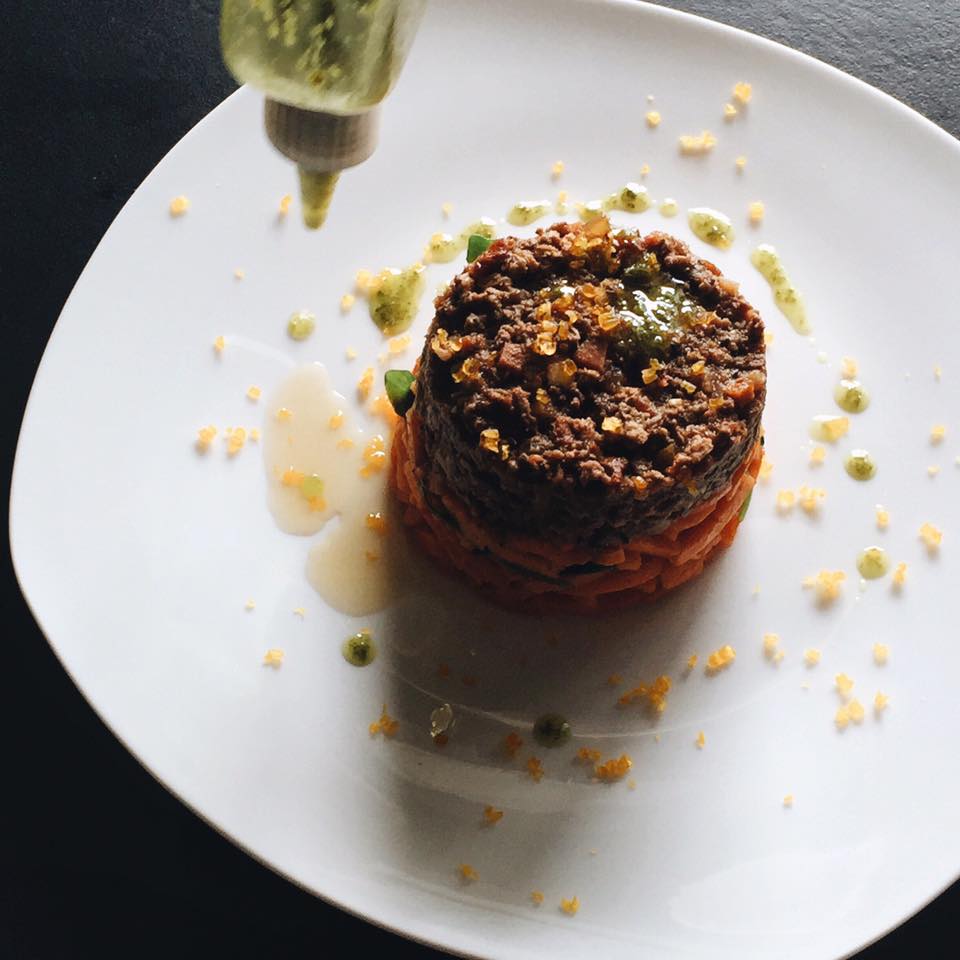 THE PRIMAL GOURMET with Paul and Nicole Gusé

There’s nothing quite as comforting as a meal cooked slowly in a heavy cast iron dutch oven, especially one as aromatic and warming as homemade bolognese sauce. Our Paleo-friendly bolognese combines the sweetness of parsnips and carrots with a bit of heat, resulting in a truly satisfying flavor.

Pair this dish with a robust vegetable noodle, such as sweet potato or butternut squash, and it’s a traditional-meets-Paleo version you’re sure to love. We love the Paderno 4-Blade Spiralizer for quick and easy vegetable noodles.

First get your “mise en place” (everything in its place) taken care of beginning with your vegetables: Peel and dice to small cubes about the same size the parsnip, carrot, onion, bell pepper, and celery and set aside in a dish. Mince the garlic and set aside. Chop the sun dried tomatoes and set aside.

Heat a heavy pan, such as an enameled cast iron. Cook bacon until crisp and fat rendered. Remove bacon and set aside then drain off excess fat leaving about a tablespoon in the pan and return pan to heat. Chop bacon and reserve. Start browning ground meats in small batches and set aside until all meat has been cooked, making sure to season with salt and pepper. It is important to work in batches so that the meat browns. Too much meat in the pan at once and the meat will sweat and not get the color and flavor needed. Once all the meat is cooked, drain off excess fat again and then add the diced vegetables prepared earlier. Cook just long enough to remove the sharpness of the onion seasoning with salt and pepper and then add the garlic and cook for about a minute. Add the peeled and cored tomatoes or you can used canned tomatoes such as Cento San Marzano. Continue to cook and break down the tomatoes making sure there are no large pieces. Add the sun dried tomatoes and the previously browned meat and bacon and incorporate well. Add stock and bay leaves bringing to a boil for a few minutes then reduce heat to a simmer, cover, and let cook for at least 20-30 minutes.

About 7-10 minutes before serving, prepare pasta or vegetable noodles.

We finished ours with cured egg yolk and a drizzle of olive oil.

*To make your own sausage, simply take your meat of choice and add ratios of Greek or Italian oregano, smoked paprika, Italian herb blend, sage, ground black pepper, and chili flake (to taste) and mix very well with hands until the herb and spice blend is well incorporated.

For additional Paleo-friendly recipes and tips, visit The Primal Gourmet.

Add a rock ‘n’ roll edge to any handbag.